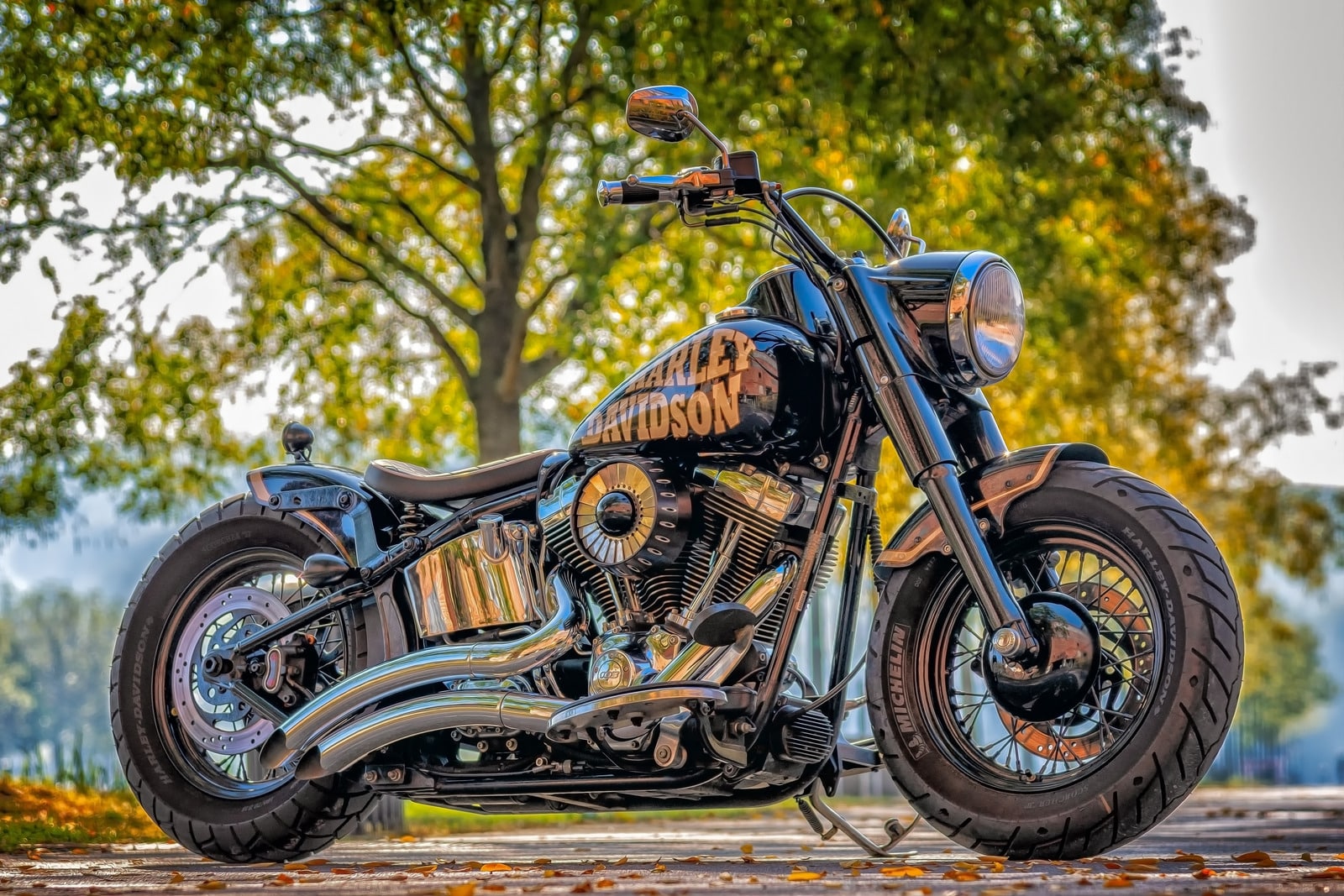 After tons of research, we’ve put together this list of best-sounding touring exhausts for Harley motorcycles.

Let’s take a look at each of these great-sounding Harley touring exhausts and see what makes them special.

While listing down these “best sounding” Harley exhausts for touring, I’d like you to know that, as you can guess, I haven’t tried all of these exhausts, so to make it a beneficial list, I’ll be quoting real happy users who’ve bought and used the exhaust so you get the real deal.

Also, I’ll include some of my opinions here and there so you can get an idea of what I think of it.

Look and sound great. 4 out of 5 because the pipes did not fit direct like the add said they would on my 2004 Road King. I had to trim the muffler 1/4”, and install adapter because the muffler was the same diameter as the head pipe. You will want to order clamps these mufflers do not come with them.

Exhaust system from SHARKROAD has great sound and a low price. Megaphone 4″ Slip-on Mufflers. The unit such as this one is suitable for Harley tourer models such as the Glide.

The aggressive appearance and sound are a result of a large 4″ megaphone. The baffle is also removable, which greatly improves the sound quality.

The 1718BB features an attractive chrome-style design in addition to increased torque and power. After 2017, the exhaust specifically targets Harley-Davidson touring models. Electra Glide and Street Glide are similar bikes.

A louder sound can be achieved by removing the baffle.

SHARKROAD exhausts are considered one of the best in terms of performance and value. Nothing less from SHARKROAD is acceptable. If you compare its price with another product, you may not find one that’s better.

These are the cats ass. Didn’t do no tuning of the ecm just threw em on! My bike is EFI so I was leary of back fire but it purrs. The new mufflers do not have threaded holes like the stock ones I took off so I just turned the bolt upside down and no worry. Didn’t buy any new fasteners. They are LOUD but just right loud. My stereo still sounds great which was another worry and these cost a third for what name brand want. Excellent construction, premium chrome. So easy to install a caveman can do it.

Taking into consideration the number of exhaust options available, it can be daunting to find the best exhaust that sounds good.

It’s not hard to say that the SHARKROAD Chrome Slip-On Mufflers Exhaust is one of a few products that offer the best of all worlds.

SHARKROAD’s best exhaust system for Harley Touring 1995-2016 models. A unit like this will not only look great but also sound great, so you definitely shouldn’t look anywhere else.

Baffles that are removable not only increase power, but maximize torque as well.

An exhaust like this is one of its most noteworthy features – it’s rare to see this feature in its competitors.

Overheating is also prevented by the inlets. Your bike will also impress you with its chrome finish.

You won’t need a professional to install it, because it’s pretty simple. The clamp works with any clamp you already have – bolts, nuts, and washers are included.

The Dude Approves! went riding with my buds last weekend 200mi or so NICE!

Lov the deep rumble at idle and if ya get down on it u can really piss the neighbors off.

Now if ya got Hard bags like I do throw that junk away that come with it and go the hardware and get grade8 bolts a 1/4 inch shorter with locks and flats (about $4 worth) and double nut them that way ya know they wont vibrate loose.

A Bagger Brothers exhaust has an incredible sound profile when compared with other exhaust products available. From 1996 to 2016, this muffler will fit Harley touring models. Thus, if you have a Harley that fits this description, you should consider this pair.

In contrast to other units we’ve reviewed, this one can be quite noisy, but it’s still considered neighbor-friendly.

Riders who enjoy pipes will appreciate this deep, throaty sound that is not obtrusive or obtrusive. Exhaust end caps machined from CNC material complement chromed bodies.

There’s no reason to upgrade your carburetor or change the specifications of your ECM. It all depends on which Harley model you have.

Installing an exhaust system is not difficult. With the aid of a mounting bracket, this can be achieved. The lifespan of a regular stock pipe is shorter. Their prices seem reasonable when compared to what they offer.

As a result, it is one of the best upgrades for Harley riders eager to upgrade their sound and performance.

Awesome.. not too loud but loud and deep. Sounds like a harley. As well as making a noticeable hp increase . Didn’t expect that. Better sound the the 7 or 800 dollar slip ons!

This chrome-styled slip-on muffler exhaust is a great choice for Harley touring models released from 2017-2018.

The 6107 FLH is similar to the 6107 FLH except for the chrome-style finish and the lower sound profile. Additionally, the 6107 FLH is intended to be used with Harley models made before 2016, while the Chrome Neighbor Haters is another version from more recent times.

Although this unit does not sound as loud as the megaphone, it is still sufficient for a pleasant listening experience. With a deep rumble and an attractive design, this pipe sounds so much better than any stock pipe.

The trumpet bell-shaped core exits the model similar to the previous one. This design, however, is perforated, rather than spiral. However, the 6107 FLH’s v-twin cannot flow as intensely as its counterpart.

There are more efficient exhausts out there, but this exhaust still performs well. A boost in horsepower and torque will be noticeable.

Perfect fit, look great and add that classic fishtail look to your bike. VERY distinct sound from fishtails and these pipes capture that perfectly. I definitely recommend these slip ons. Replace the stock ones and come with new bolts. You will not be disappointed with the sound.

In addition to aesthetics, price is also an important factor to consider. There is no beating efficiency, but we all agree that it is the best. You won’t go wrong with this beautiful unit from DRACULA EXTREME if you’re looking for fishtails that look and sound amazing.

A chrome-styled classic exhaust system for 1995-2016 Harley touring models, this has to be one of the best fishtails on the market.

I’m not sure if any other model can come close to its sound. Tests have been carried out on the muffler to ensure its durability, safety, and performance. It currently has the best performance of all the DRACULA EXTREME mufflers.

The installation process is easy and quick as the instructions are very straightforward. Your bike’s heat shield may need to be modified.

We’re confident DRACULA XTREME Fishtail is going to deliver on its promise. Your money will definitely be well spent.

You have the opportunity to clear up any doubts you may have about DRACULA XTREME now.

These pipes are awesome!

They sound great! Not too loud that I can’t hear the stereo. VERY easy to install…

You may enjoy this condominium, as long as you don’t mind annoying the neighbors. Taking it lightly is not an option.

The first thing you’ll notice is that the pipes have rolled edges and a megaphone-design. They also emit a higher volume of sound in addition to being visually pleasing.

Due to its trumpet-like louvered core exits, which mimic bells in a trumpet, it is also possible to obtain a full note from its v-twin sound. Durability and performance are also strong points of the unit.

We find this unit to be positive in general. Even if they aren’t the most effective, slip-on mufflers are the most cost-effective option available for this car.

Install was easy as this is just a slip on. The design and look of the pipe is great and vary comparable to the high end pipes. Sound is loud but not too loud with a deep rumble to the tone.

Since the majority of the slip ons are all basically made the same, buying this one is a no brainer. Don’t get fooled into buying a expensive slip on as there is no point. This is a great bargain for the price. Would definitely recommend this product.

Adding a little chrome style to your exhaust system with DNA 4″ Chrome Styled Slip-On Mufflers from Mototeks is next on our list. In addition to its nice appearance, Mototek DNA is easy to set up. The sound is still good, however. The tone of the guitar is deep and rumbling; the sound is fantastic.

Harley models from 1995 to 2016 are best suited to these tires. Therefore, if you’re riding a Harley Bicycle like the Ultra Classic, or something similar to it, then you shouldn’t have any problems.

It offers removable baffles, like many high-end exhausts, allowing you to optimize the exhaust’s performance. There is some volume, but it isn’t obnoxious.

In addition to their 4″ inlet, they are made of stainless steel, which is durable and attractive.

Many customers report using this exhaust longer than others of the same brand. Therefore, you can be sure you will get a reasonable price.

Aside from being easy to install, the DNA 4″ exhaust system looks perfectly nice. With its reasonable price, this part gives your bike a fresh look.