I’ll help you pick the better motorcycle helmet out of these two, and also share what makes one better over the other. 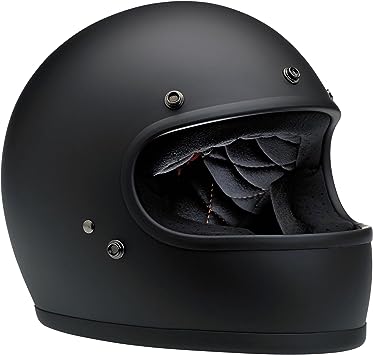 Biltwell Gringo, compared to the Gringo S, weighs less, which is one of the deciding factors I look at when picking up a new motorcycle helmet. If you feel you like the Gringo S better, feel free.

“I’m not really into helmets. Buddy had one and I tried it on and liked it. First day I got it I went for a ride. First ride ever with a helmet and crashed. Bike slid and I rolled about 15ft. Banged up the knee and ankle only thankfully. It all happened in slo mo. I got up checked myself and was ok. Banged up but ok.”

Among its features, the helmet features a seamless, injection-molded ABS outer shell, a shock-absorbent EPS inner shell, and an open-cell foam and Lycra liner that can be removed and washed.

Likewise, the BioFoam chin bar also features a stitched diamond pattern, so it incorporates the same pattern as the ventilated panels inside the liner. In spite of being DOT-approved, the Gringo leaves out gizmos and vents for an aesthetic that references the golden age of speed when legends such as Kenny Roberts and Mert Lawwill ruled the track.

This full-face helmet has an MSRP of $149.95, making it the ideal choice for riders who are image- (and price-) conscious. There are better motorcycle retailers worldwide as well as on the company’s website at www.BiltwellInc.com, where you can purchase the Biltwell Gringo full-face helmet.

“Great helmet! I’ve got a bigger head, and every single full face helmet I tried on did not fit at my local motorcycle shop, except this one.”

Biltwell’s Gringo S full-face helmet is a staple in its lineup. In the Gringo S full-face helmet, riders will find themselves happy to enjoy the classic styling of Bell’s original Star model from the late 1960s. Biltwell’s Gringo S features a classic fit, molded from ABS and polycarbonate with an EPS liner to conform to industry requirements. Gringo isn’t made for racing; it’s for getting where you’re going in style and staying protected at the same time.

In the demo, the Gringo S did not box in my ears, which is hugely valuable since I have bespectacled. A hand-stitched Lycra liner makes the Gringo S comfortable and more pleasant to wear than old helmets. Although the Gringo S has a bottom opening, it still provides a healthy amount of ventilation without generating excessive noise or turbulence. Because it does not suffer from wind buffeting, the Gringo S is not as noisy as other models.

It comes in a Black/Vintage White LE Tracker version. In addition to the Gringo S’s wide variety of colors that you can choose from, we chose the Limited Edition model, which is why the LE stands for Limited Edition. This LE helmet from Biltwell Inc., available in Black / Vintage White and Checkered Stripe White, features a phenomenal design. The Gringo S line was created by Biltwell Inc. in a manner that is more than admirable. You might be interested in the Biltwell Gringo S line if you’re looking for affordable, era-specific reproductions that aren’t using technology that’s several decades old.